"There are times when people need stories more than they need nourishment, because the stories feed something deeper than the needs of the body." Charles DeLint, The Onion Girl 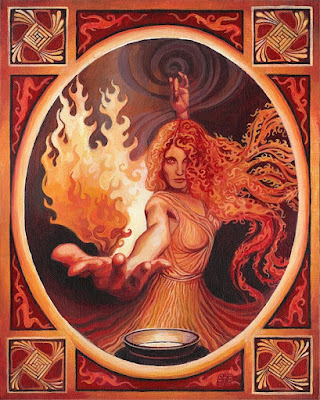 Perhaps it’s time to ‘re-story’ the world. So much of our American culture is new and cutting edge that we’ve lost touch with the old, ancient meaning of the important things in life.

Do you know that we are about to enter the second phase of Winter, the time when the light will grow quickly now?

We keep a remnant of the old beliefs about this time of year in our celebration of Groundhog’s Day, when the groundhog peeks out of his hole and determines if Spring is on its way.

What is actually happening is that the Sun, on its journey back North, has reached a point where it can now bring more light to the northern hemisphere.

There were many ancient festivals celebrating this fact.

In ancient Rome, February was the month to clean out your inner and outer living space, letting go of the old year to make space for a new beginning in your life. 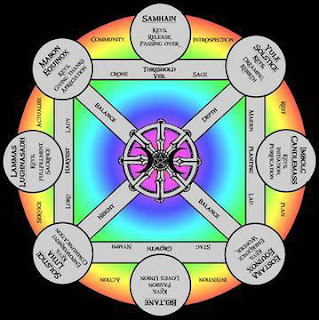 In the Celtic Wheel of the Year, this is the celebration of Imbolc, one of the four cross-quarter fire holidays that occur halfway between the solstices and equinoxes at 15* of the fixed, power signs of Aquarius, Taurus, Leo and Scorpio.

Imbolc or St. Brigit’s Day, signals the first signs of Spring and the return of light and life. It is the quickening of the year, the time of pregnancy and expectancy of life which is still hidden but just beginning to be seen. It’s the promise of renewal and the awakening of Earth’s life-force. It is also a time of prophecy and vision – the groundhog looking for his shadow!

St. Brigit/Bridget/Bride was the ancient Irish Mother Goddess, who was so beloved that the Catholic Church turned her into a saint. She is the Triple Goddess, but at Imbolc she is in her Maiden aspect. She is a Goddess of healing, poetry and smithcraft. She is a Goddess of Fire, of the Sun and of the Hearth. She brings fertility to the land and its people and is closely connected to midwives and new-born babies.

Finally the Catholic Church called this festival Candlemas, celebrating the purification of Mary, the Lightbearer. This is the time when the Church blesses all the candles they use during the year in ritual, and they have a ritual where they bless people’s throats to protect them from colds during the late winter months. 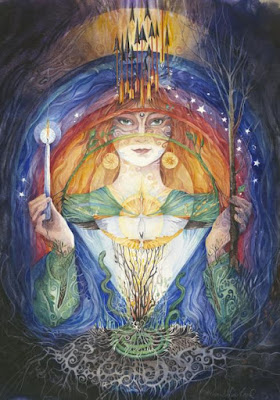 Brigid, the Celtic goddess of the fires of the forge and the hearth, of poetry, healing, childbirth, and unity, is celebrated in many European countries. She is known by many names, including that of Saint Brigid who is, perhaps, the most powerful religious figure in Irish history. Her cult was so powerful that the Celtic Christian Church had to adopt her as a Saint, and the Roman Catholic Church followed suit, for her people would not abandon her. Along with St. Patrick, she is the patron Saint of Ireland. St. Brigid is often referred to as Muire na nGael ‘Mary of the Gael’. The name Brigit itself means either ‘Fiery Arrow’, ‘Bright One’, or ‘High One’ in the ancient Celtic language, referring to her solar aspect, as she is a goddess of Light and Flame.

Brigid, Brigit or Brighid (pronounced Breed) is an important Celtic Triple goddess, changing form from Maiden to Mother to Crone. She is the patroness of poetry, healing and smithcraft, all different forms of using the creative fires of life with practical and inspired wisdom. As a solar deity Her attributes are light, inspiration and all skills associated with fire. Although She might not be identified with the physical Sun, She is certainly the benefactress of inner healing and vital energy. 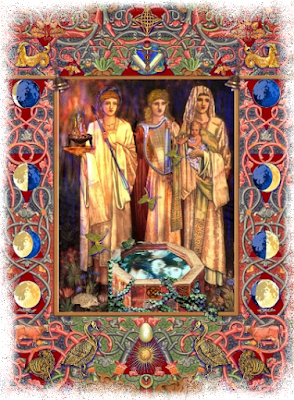 Robert Graves calls her 'the White Goddess' but she's not all sweetness and light—she has her dark side, especially if we don't hold up our part of the bargain. She is a Muse that inspires, but can also be fickle if we prove unworthy of her gift. We must do something with that gift of creativity or we will lose it.

Brigid is a goddess of natural springs, those magical places on the Earth where sacred and life-giving waters suddenly flow out of the Earth. A gift of Life from Mother Earth. Ireland is full of springs and wells named after the goddess Brigid. As Water deity, Brigid is the patroness of healers, with many healing springs and wells dedicated to Her throughout the British Isles. Symbolically, water is a portal to the Otherworld and a source of wisdom and healing. Water is also associated with psychic ability, music, and poetry. Natural bodies of water were also sacred to her, particularly where three streams join together. There is a saying that Brigid rewards any offering to her, so offerings of coins were tossed into her wells...the forerunner of the modern custom of throwing a penny into a fountain while you make a wish.

One of the most popular tales of the goddess Brigid involved two lepers who appeared at her sacred well at Kildare and asked to be healed. She told them that they were to bathe each other until the skin healed. After the first one was healed, he felt only revulsion for the other and would not touch him to bathe him. Angered, Brigid caused his leprosy to return. Then she gently placed her mantle (cloak) around the other leper who was immediately healed.

The story of Brigid's birth says a lot about her powers of vision, hope and new life.

Born at the exact moment of daybreak, Brigid rose into the sky with the sun, rays of fire beaming from her head. She was the daughter of Dagda, the great 'father-god' of Ireland. Or perhaps in truth she was here before the Dagda and was his solar mother.

The infant goddess was fed with milk from a sacred cow from the Otherworld. Brigid also owned an apple orchard in the Otherworld and her bees would bring their magical nectar back to earth. It is said that wherever she walked, small flowers and shamrocks would appear. As a sun goddess her gifts are light (consciousness), inspiration, and the vital and healing energy of the sun.

At her most famous shrine Brigid taught humans how to gather and use herbs for their healing properties, how to care for their livestock, and how to forge iron into tools. As for this art of smithcraft, we need both the hottest fires and cooling waters to temper our swords and our plowshares. Both these elements spring from acting with Love. As a goddess of childbirth and protector of all children, she is the patroness of midwifery.

This shrine, near Kildare, was located near an ancient Oak that was considered to be sacred by the Druids, so sacred in fact that no one was allowed to bring a weapon there. The shrine is believed to have been an ancient college of priestesses who were committed to thirty years of service, after which they were free to leave and marry. During their first ten years they received training, the next ten were spent tending the sacred wells, groves and hills of the goddess Brigid, and the last decade was spent in teaching others. Nineteen priestesses were assigned to tend the perpetual flame of the sacred fire of Brigid. Each was assigned to keep the flames alive for one day. On the twentieth day, the goddess Brigid herself kept the fire burning brightly.

The Christian monastery eventually built upon the site of her sacred shrine continued this tradition and became known as a great European center of learning and culture. Indeed, it was instrumental in preserving much ancient learning and literature during the Dark Ages.

The goddess Brigid was also revered as the Irish goddess of poetry and song. Known for her hospitality to poets, musicians, and scholars, she is known as the Irish muse of poetry. So Brigid is the goddess of Bards, musicians and poets, the Muse who inspires. Brigid's fire and water nurtures our inspiration, our ability to 'breath in spirit' which helps us create poetry as well as healing. She is our Muse, who inspires our soul.

Brigit is patroness of poetry and bardic lore as well as bards themselves, who were the oral transmitters of the Celtic culture. This includes storytellers, folklorists, mythologists, balladeers, singers, composers, poets, musicians, particularly harpers, historians and clan genealogists. She provided the ‘fire in the head’ of poetic inspiration. The Bards are the surviving class of the Druids, keeping the ancient traditions alive until the present day. Bards were the honoured guests from cottage to castle, patronized and supported by a network of clientele. The word file – poet, is related to the word faic – to see. Poets are inspired by the Other World, and have the gift of prophecy.

As the patroness of poetry and bardic lore, she is the primal retainer of culture and learning. The bansidhe and the filidh, Woman of the Fairy Hills and the class of Seer-poets, respectively, preserve the poetic function of Brigid by keeping the oral tradition alive. It is widely believed that those poets who have gone before inhabit the realms between the worlds, overlapping into ours so that the old songs and stories will be heard and repeated. Thus does Brigid fulfill the function of providing a continuity by inspiring and encouraging us.

If you want to start to ‘re-story’ your world, take time out this Imbolc to create a ritual to envision what your year will bring to you. Light a candle, take a journey to the goddess’ cauldron of life and let your creative imagination give you the clue to the next stage of your life.

Welcome to The Bard's Grove

It is so hopeful to see people actively searching for new stories to shape their lives in these changing times. Privileged, as I am, to listen to these personal journeys in my practice, I’ve come to recognize that we all long for stories that feed our souls. Stories that offer us clues that direct us along our paths to that new story we’ve each been searching for.

And so this blog came into being.

In the months ahead, I am going to weave a series of story tapestries, comprised of my favorite archetypal movies and books, important archetypal dreams people are dreaming, and astrological insights into what’s going on in the Cosmic Story. The world is changing, and there are stories that speak to the changing archetypal patterns and mythic themes that collectively affect us. Our personal journey and purpose is tied to the collective energies of our communities and our world. We really are in for a sea-change, and while I hope that all goes smoothly, every birth takes time, energy and some pain. That’s why it’s called LABOR.

I hope that sharing my knowledge of story, dream and astrology will inspire you to make positive changes in that life story of yours. It’s time for a new you, a new us, a new world. For that to happen, we need stories to believe in, stories that open us to new possibilities. So join me and come stretch your imagination. It’s time to think outside the box of our patriarchal paradigm and discover a new world of possible futures.